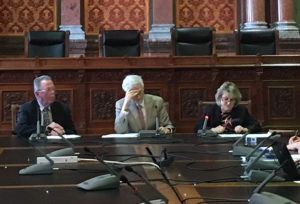 It appears officials will soon make a significant withdrawal from the state’s “rainy day” account to cover the latest state budget dilemma.

“The Iowa economy is showing signs of weakness in some areas,” Holly Lyons, director of the Legislative Services Agency said today. “There is no indication that we are headed into a recession in the near-term, but we are facing a difficult time.”

Lyons serves on a small panel of financial experts who met late this morning and reduced their estimate of state tax collections by $131 million for the current budgeting year. After a previous round of budget cuts in February and with just three months left in the state’s spending plan, Iowa Department of Management director Dave Roederer said using the state’s cash reserve is the only real option left.

“We’ll just have to work our way out of it,” said Roederer, who is also a member of the Revenue Estimating Conference.

In a written statement issued shortly after the meeting concluded, Senate Republican Leader Bill Dix agreed with Roederer that additional budget cuts “are not reasonable” and state policymakers will opt to use some of the “hundreds of millions” in the state’s rainy day account.

Lyons, the Legislative Services Agency director, said there’s “underlying strength” to the Iowa economy, but slightly fewer Iowans were in the workforce in 2016 than originally thought.

“Iowa is close to full employment,” Lyons said, “and it may be more of an issue of qualified employees than a lack of available jobs for the economy to grow at a healthy pace.”

Roederer, who is the governor’s top budget advisor, told reporters the situation is not dour, as the state is still projected to collect about four percent more in taxes this year compared to last.

“Over a 25 to 30 year period to time, our average growth in the state has been four percent and if you were to recalculate the numbers now, it’s still about four percent,” Roederer said. “We had some years that it was up in the five and six and seven (percent) range and when we’re up higher, obviously, it was when agriculture commodity prices were much higher.”

David Underwood, a retired businessman from Mason City, is the other member of the panel that sets the official estimate of state tax collections. Underwood said during the meeting that he’s surprised there’s not more income growth being shown on the 2016 personal income tax returns Iowans have filed so far.

“And the sales tax continues to be perplexing in Iowa,” Underwood said. “It’s difficult to believe there’s that small a level of growth…It doesn’t really make a lot of sense.”

More than a third of all the revenue collected by the state comes from the state sales tax. Sales tax collections are running not quite even with a year ago. Experts cite the shift to online purchases, where customers often can avoid paying state sales taxes.

In addition, lawmakers last year erased the state sales taxes manufacturers paid on goods that are “consumed” during the manufacturing process, things like bolts, hydraulic fluid and drill bits. Critics like House Democratic Leader Mark Smith say that and other “corporate tax giveaways” are having a bigger impact that anticipated.