You are here: Home / Fires/Accidents/Disasters / No fish kill found in creek near Graettinger ethanol train derailment 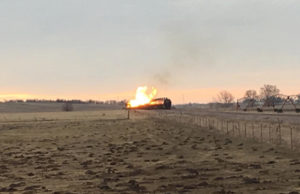 Tanker car on fire after derailment.

Final cleanup is underway at the site where 20 rail cars loaded with ethanol went off the track last Friday south of Graettinger.

Some of the cars exploded into flames, while five fell into nearby Jack Creek. DNR spokesperson, Amber Wolfe, says each of the rail cars can carry 28,000 gallons of ethanol, but they aren’t sure how much was lost.

Wolfe says an estimated 3,600 gallons of ethanol flowed out of the three rail cars that had to be pulled form the creek — but they haven’t seen any impact. “From what we can tell in our field sampling and monitoring, dissolved oxygen levels are high — and when I mean high — they are normal for this time of year,” Wolfe explains. “The flows in Jack Creek and the Des Moines River are very high, so any product that did make it to the creek would be extremely diluted. And we have seen no sign of a fish kill either.”

Palo Alto County Sheriff Lynn Schultes said the accident happened just before 1 a.m. and the Union Pacific train was pulling 101 loaded tanker cars which had recently been filled at an ethanol plant in Superior. Wolfe says they don’t know why the cars went off the track.

Wolfe says there’s been no confirmation at this point, but the National Transportation Safety Board has wrapped up its investigation this weekend. She says the cause of the accident won’t be known until they release that report. The engineer and conductor aboard the train escaped unharmed. Residents in four homes nearby were evacuated for a time as a precaution while the tankers were burning.