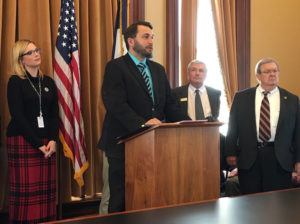 A dozen of the 57 Republicans in the Iowa House have signed onto a bill that would incrementally raise the state sales tax by fractions, to raise money for water quality initiatives.

“We’re calling it the WISE Bill — the Water, Infrastructure and Soil for our Economy Bill,” Representative Bobby Kaufmann of Wilton, the proposal’s lead sponsor, said during a statehouse news conference.

The bill would raise the sales tax by one-eighth of a percent in each of the next three years. By that third year, it would raise an estimated $180 million annually. Kaufmann said that $180 million could replace other state tax money being spent on water quality projects — and he’s suggesting income taxes for low-income Iowans could be reduced as a result.

“People move to Linn County because they want to have it all,” Hinson said. “They want to be able to have a job, have a family and then have the place to play, too, so water quality is imperative.”

Representative Andy McKean, a Republican from Anamosa who is another co-sponsor of the bill, said it’s crafted in the tradition of former Republican President Teddy Roosevelt who founded the National Park system.

“I think it’s high time that Republicans start taking the lead on some of these environmental and conservation issues,” McKean said.

There’s another water quality improvement package already moving through the legislature. Governor Branstad has expressed support for its contents — and Branstad has said he’s not interested in raising the sales tax to expand the state’s water quality efforts.