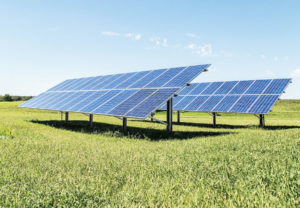 The solar industry is one of Iowa’s fastest growing job markets, but state regulators are considering a move which critics say would steer homeowners and businesses away from solar.

An Iowa utility official disagrees, saying the changes will be a plus. Channing Congdon, with Fairfield-based Ideal Energy Solar, says changes are looming in what’s called “net metering,” the billing system that credits solar system owners who add power to the grid.

“For example, if a customer has a PV (photovoltaic) system on the home’s rooftop, it can generate more electricity than the home uses during daylight hours,” Congdon says. “If the home is net metered, the electricity meter will run backwards to provide a credit against what electricity is consumed at night or at other periods where the home’s electricity use exceeds the solar system’s output.”

The Iowa Utilities Board is considering changes in how net metering is handled by Alliant and MidAmerican Energy. Congdon fears the ruling would “cap” net metering as soon as April 1st.

Congdon says, “The public filing that Alliant has made has shown there’s going to be about a 62% reduction in net metering available for residential customers and a 68% reduction for general service or business customers.” Current solar energy system users will be able to keep their current deal according to Congdon, but he says new solar users will be subject to the new regulations. He says it’ll have a “chilling effect” on new solar energy development in Iowa.

“Rather than expanding net metering and expanding solar in the state, this is clearly a move to put a brake on or reduce the amount of distributed energy that can be installed in the state,” Congdon says. “That’s really where our frustration lies. This was supposed to be a process for the purpose of expanding solar and now what’s moving forward is something that’s exactly the opposite.”

A coalition of solar companies and nonprofit groups is trying to sway the Iowa Utilities Board’s ruling with an online petition. The coalition’s website is: www.saveiowasolar.org. Congdon says the net metering change will reduce the financial viability of new solar installations for residential and commercial customers by making solar a “poor investment.”

Doug Kopp, president of the Alliant Energy subsidiary Iowa Power and Light, says the changes being proposed would benefit, not hurt, solar clients. Kopp says Alliant is pursuing a host of renewable energy sources, including wind and solar.

“During the course of the year, customers will continue to get a full retail credit as they go through that year,” Kopp says, “and then at the end of the year, we will cash out any remaining balance at what’s essentially the wholesale market price for energy.”

The change won’t impact many solar users, Kopp says, as very few have a balance at the end of the year. Alliant has more than 2,100 customers in Iowa who use solar power. Kopp says the online petitioners may think Alliant views solar as a rival, but he assures that’s not the case.

“Certainly, people could have a perspective that looks like we’re the big utility company and therefore, we don’t want any competition but we really see solar as a part of the future,” Kopp says. While solar has many benefits, Kopp adds wind power is currently the most cost-effective method to deliver renewable energy in Iowa, though he says that may change.

Don Tormey, spokesman for the Iowa Utilities Board, says no decision has been made on the proposed changes to net metering, what he calls a pilot tariff. “The Iowa Utilities Board has not approved the revised pilot tariffs that have been filed by Alliant/Interstate Power and Light Company and MidAmerican Energy Company with the board and they did that at the board’s request from their February 3rd order that was issued asking those two utility companies to file the revised tariffs regarding net metering.”

If approved, the pilot tariffs would be temporary, Tormey says, and in place for a 3-year study period to help the board make future decisions. Tormey says there’s been some misinformation about the proposals and he suggests Iowans with concerns should look it over for themselves.

“Anyone can access the documents for these two proposed pilot tariffs or the board’s orders by looking in the board’s electronic filing system which is efs.iowa.gov,” Tormey says. “If they have any questions, they can contact me directly here at the board.”

A recent report finds the number of people working in the solar industry in Iowa rose just over 60% in the past two years. The non-profit Solar Foundation says Iowa had about 350 solar jobs in 2015 versus more than 560 last year. The study also says one out of every 50 new jobs in the country last year was in the solar industry.