You are here: Home / Military / Surveillance plane to stay with Iowa Air Guard 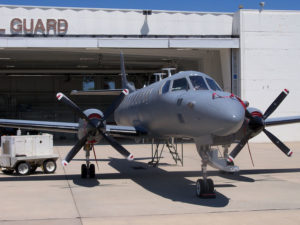 The RC-26 airplane in Des Moines.

Iowa’s entire congressional delegation is applauding the decision of the U.S. Air National Guard to leave a specialized airplane at the Iowa Air Guard base in Des Moines.

Iowa Guard spokesman, Colonel Greg Hapgood, says the RC-26 airplane was first assigned on a temporary basis. He says it has a variety of uses.

“Our pilot based at the 132nd Wing fly the aircraft to maintain their currency as pilots — but they also use it to do things like counter drug missions. And also they can provide information about emergencies here in the state of Iowa if need be, using that aircraft,” according to Hapgood.

Information from the Iowa congressional delegation requesting that the plane be kept in Iowa says it was used in missions for 10 federal and state agencies, and “helped seize $566,900 in methamphetamine in fiscal year 2016. In fiscal year 2015, it helped seize 20 illegal weapons, over $500,000 in methamphetamine, and four-thousand dollars in heroin.”

The 132nd wing flew F-16 fighter jets before they were moved out, but the RC-26 doesn’t look anything like a fighter. Hapgood says it is a twin-engine aircraft that has the look of a passenger aircraft. He says the Iowa Air Guard is happy to see the plane stay in Des Moines.

“It’s certainly just another tool in our toolbox to be able to keep Iowans safe here at home, and also to make sure that our pilots maintain their currency and their competency as an aviator,” Hapgood says. The 132nd Wing is based at the Des Moines airport.