You are here: Home / Sports / Jok to take part in college 3-point championship 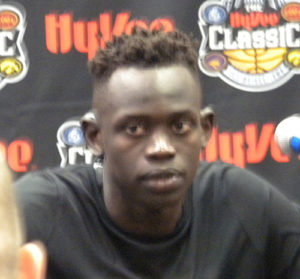 Iowa’s Peter Jok has been selected to the 3-point Championship roster for the 29th annual State Farm College Slam Dunk & 3-Point Championships at Grand Canyon University Arena in Phoenix on Thursday, March 30, Intersport announced Thursday. Jok is one of eight men’s college basketball players selected for the event that will air live on ESPN at 9 p.m. CT. He was invited to take part in the 3-Point Championship after being recognized as one of the nation’s finest shooters from 3-point territory.

The shooting guard has scored 30 points or more five times this season, a total that ties for first among players from Power 5 conferences. Jok (6-foot-6, 205 pounds) poured in a career-high 42 points against Memphis on Nov. 26; the 42 points are the most by a Hawkeye in 40 years and ties Bruce King (1976) for fourth most in Iowa single-game history. The team co-captain has posted four double-doubles this season and his 19.8 points per game scoring average ranks sixth among players from Power 5 conferences.

Intersport, producers of the event, invites 24 of the nation’s elite men’s and women’s college basketball players to compete in the State Farm College Slam Dunk & 3-Point Championships (eight dunkers, along with eight men’s and eight women’s shooters). The program showcases the dunking and sharp-shooting talents of the nation’s top college basketball players during the Be The Match Team Shootout, the Great Clips Men’s 3-Point Shooting Championship, the Marine’s Women’s 3-Point Shooting Championship, the Shoe Carnival Battle of the Champions, and the Denny’s Slam Dunk Championship.

A complete list of participants will be released at a later date.