You are here: Home / News / No pot of gold, but a big St. Paddy’s Day check for Cedar Rapids man 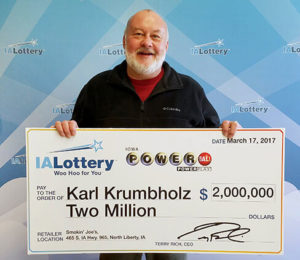 Karl Krumbholz believes his Irish heritage may have played a role in his good fortune. “My dad’s mother was Irish and his father was German. I had the same combination on the other side,” Krumbholz said. The 63-year-old Krumbholz, who works in information-technology for University of Iowa Hospitals in North Liberty, bought his winning ticket on Monday.

It matched the first five numbers but missed the Powerball in Wednesday night’s drawing. Krumbholz plans to keep his job, but he now has a secure retirement plan. After taxes, Krumbholz is taking home $1.4 million.

“Well, I’ll probably take some of it and pay my house off, so I don’t have any bills. Then, I’ll put the rest away,” Krumbholz said. Wednesday’s winning numbers were: 16-30-41-48-53 and Powerball 16. No one matched all six numbers to win the $123.4 million jackpot, so the prize climbs to an estimated $141 million for Saturday.

Krumbholz buys Powerball tickets regularly at Smokin’ Joe’s, a tobacco shop in North Liberty. A woman who works there was aware he was likely holding the $2 million ticket purchased at the shop. She greeted Krumbholz when he stopped in Thursday morning.

Krumbholz had multiple plays on his ticket and in addition to his $2 million winner, he also had a $12 winner.