You are here: Home / Agriculture / ‘I hope he stays,’ Governor Branstad says of ISU’s president 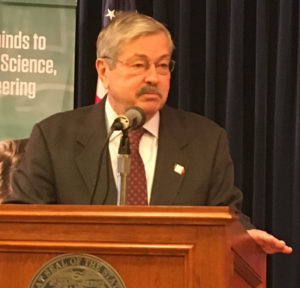 Iowa State University president Steven Leath is rumored to be a finalist for a new job as president of Auburn University. Governor Terry Branstad this morning told reporters  he’s not heard from Leath.

“Frankly, I hope he stays at Iowa State University because I’m appreciative of what he’s done,” Branstad said.

Auburn officials will be revealing their choice sometime today. Branstad credits Leath for focusing and expanding some of Iowa State’s core academic programs.

Leath, who is 59, was a vice president at North Carolina when he was named Iowa State’s president back in 2012. Auburn and Iowa State are both “land grant” universities. Auburn was known as the Agricultural and Mechanical College of Alabama when it was established in 1872. Iowa State — originally called the Iowa Agricultural College and Model Farm — is the nation’s first land-grant college.