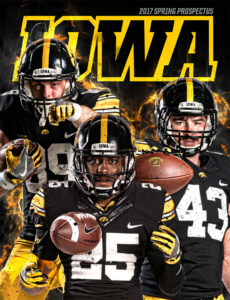 The cover of the Iowa Spring Football Prospectus.

The Hawkeyes lose 5 starters on offense, 3 on defense and must find a new punter.

Ferentz says the good thing about graduation is that it creates new opportunities for the returning players as they says goodbye to those who graduated.

The players have 15 spring practices to show their stuff. “One thing about football, our opportunities to practice football, to be in helmets is so limited. So, be it in the spring and then certainly preseason — those opportunities are very limited. Each and every workout is important, each and every practice, the meetings that we have that go along with it, as well as our strength and conditioning work that continues is very important to the players. And I think they understand that,” Ferentz says.

Ferentz says the lines return experience, but they’ll need to find players to complement them. He says they are very young and inexperienced on the perimeter from the receivers to the defensive backs. “I’d throw the quarterback situation right in there with it… we will have a new quarterback, I”m not sure who that’s going to be right now.”

Receiver Matt Vandeberg won a redshirt year after being injured last year, but has been sidelined again with another foot injury and will miss the spring practices. Ferentz says it wasn’t a matter of him trying to come back too early. “He really had a chance to play in the bowl game, that thing was well healed when he got back in January. That’s just one of those things that happens occasionally and there’s not much we can do about it,” according to Ferentz.

The Hawkeyes announced they will hold an open practice for the fifth year in a row at Valley Stadium in West Des Moines on April 7th. Ferentz says they are excited to go back to central Iowa and says it’s a small way to says thank you to the fans who come from the area to Iowa City in the fall. He says they also decided to move the spring game to Friday night as something the fans might like.

Iowa is coming off an 8-5 season where they lost their fifth straight bowl game. They open the 2017 football season September 2nd hosting Wyoming.