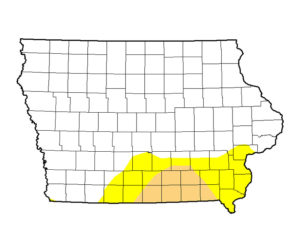 The northern part of Iowa remains wetter than normal, while the driest part of the state in southern Iowa hasn’t change much either during the winter months.

Tim Hall tracks the groundwater situation for the Iowa Department of Natural Resources. “It’s that southeastern corner of Iowa that we’re just keeping an eye on. They have been drier than the rest of the state for quite a while. They just haven’t gotten that rainfall that they are used to getting in says just the last six months or so,” Hall says. He says the contrast in conditions is pretty evident.

“There’s actually some moderate drought that has crept into southeastern Iowa, and the groundwater levels sort of reflect that.,” Hall says. “It’s an interesting scenario, because the northern part of the state has been overly wet and the southern part of the state has been on the dry sides. So, there’s a fairly marked gradient as you go from south to north across Iowa.”

Several counties in the southeast Iowa area have issued burn bans as the dry conditions persist. Hall says other counties out of that area are also finding dry vegetation that’s causing concern. “The temperatures and the wind that can be present this time of year can really dry out the surface of the ground, while at the same time there can be sufficient groundwater to supply the needs,” Hall says, “so, sometimes we see a different situation on the ground surface than we see underneath the ground.”

Hall says the surface dryness is a temporary thing, and the ground water situation is more important long term. He says the groundwater conditions across the state are not too bad, and we are heading into our wettest months of the year. Hall says there’s hope the spring rains will bring some relief to southern and even farther south.

“The southeastern Iowa area that’s dry right now is the northern fringe of what is a fairly substantial area of dryness and moderate drought to our south. We’ll kind of watch that because sometimes things can happen on the fringe of those large dry areas that may affect southern Iowa,” according to Hall. The dry conditions south of Iowa in Kansas through Texas has led to wildfires that have caused many problems.

To see more about of Iowa’s water resource trends, go to www.iowadnr.gov/watersummaryupdate.