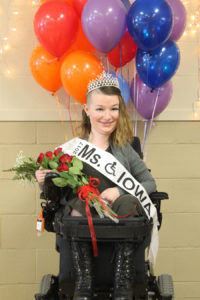 A 22-year-old University of Iowa student is the new Ms. Wheelchair Iowa after a crowning ceremony in Iowa City over the weekend.

Hannah Soyer of Johnston was diagnosed as a toddler with a progressive neuromuscular disease called spinal muscular atrophy. Soyer says she’s never let her reliance on a wheelchair for mobility slow her drive and enthusiasm.

“Disability advocacy has definitely been something that I’ve been doing pretty much all of my life,” Soyer says. “It’s something I’m very passionate about.” As the new titleholder, Soyer will be traveling around the state to spread the message about the abilities of people who have disabilities as well as her platform as the state’s new advocate for people in wheelchairs. She’s no stranger to public speaking, as she was among those featured to talk about disability rights during the Women’s March in Des Moines in January.

“My main thing I’m planning on working on is just the idea of adequate access to health care for people with disabilities,” Soyer says. “Right now, it’s obviously something that is being threatened both at the Iowa level and at the federal level.” The privatization of Iowa’s Medicaid system brought many negatives in the services Soyer was receiving and she says many Iowans with disabilities are unhappy with the changes.

“Health care needs to be something that is available at a quality level for people that need it,” Soyer says. “Right now, we’re looking at a lot of changes at the federal level that would ultimately affect Medicaid funding that would very negatively impact the lives of the people receiving those services.” Among her crusades, Soyer is speaking out about what she calls “ableism,” the misconception that people who have a disability are “somehow less than” others.

“My goal is to hopefully open more minds to the idea that the decisions that are made by our legislature are not made in a vacuum,” Soyer says. “They affect real lives, they affect real people, they affect the nearly-20-percent of our population that is disabled.”

Soyer is a senior at the U-I studying journalism and English. She hopes to go into teaching creative writing after graduation. She will represent Iowa at the Ms. Wheelchair America competition this August in Erie, Pennsylvania.