You are here: Home / Education / Branstad celebrates 1991 law that made homeschooling legal in Iowa 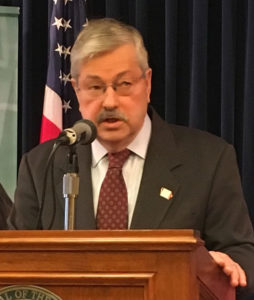 Tuesday was “Homeschool Iowa Capitol Day” and long-time Governor Terry Branstad used the occasion to reminisce about his history with the movement.

“I had the honor of signing the bill that made homeschooling without a teaching certificate legal in Iowa,” Branstad said.

“I didn’t want to see conscientious families face the prospect of having to break the law,” Branstad said.

Branstad told a crowd of about 300 parents and children that Iowa now is known for its supportive environment for home schools. Branstad signed another law in 2013 that got rid of the paperwork parents who homeschool their children had to turn in to their local public school district.

Critics say that was too lax and some have called for random government inspections of homes where parents are teaching their own children.

Branstad said parents who don’t want to send their child to a public school may benefit from a bill that cleared the Senate yesterday that would let more students to enroll in online schools.