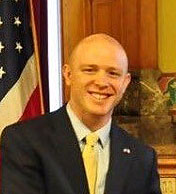 The Ethics Committee in the Iowa House has unanimously voted to sanction a lobbyist who failed to complete the online registration process required for people who lobby lawmakers.

Republican Representative Rob Taylor of West Des Moines, the committee’s chairman, spoke with reporters after the decision was made over the noon hour.

“The reason it’s so important for people to register as lobbyists is so that the public knows who it is that is giving us information and advice either for or against a certain subject matter,” Taylor said, “and it’s a requirement under law that they register.”

Taylor and the rest of the committee will send a “letter of admonishment” to Drew Klein, a lobbyist for Americans for Prosperity. The conservative group was founded by the billionaire Koch brothers and Klein lobbied hard for this year’s new law that scaled back bargaining rights for public sector workers in Iowa.

The complaint noting Klein had failed to register as a lobbyist was filed by the president of the Iowa Federation of Labor. Representative Taylor and the rest of the committee decided the complaint was valid.

“When your dad admonished you, it was a warning that you did something wrong and to take precautions in the future so that you did not repeat the same thing again,” Taylor told reporters. “I think any lobbyist should take heed on what has happened and what has occurred, so that it not happen again.”

The committee had the power to bar Klein from lobbying, but members of the panel decided his lapse was not “malicious” and a stern letter was the appropriate response.

The liberal group “Progress Iowa” had called for Taylor to step aside and not vote on the complaint, since Taylor had co-sponsored a recent Americans for Prosperity event. Taylor says he asked the top-ranking Democrat on the committee and she “felt there was no need” for Taylor to recuse himself. During today’s committee meeting, Democratic Representative Phyllis Thede of Davenport said the panel had “put blinders on” and solely considered the facts of the complaint and not the politics of the groups involved.

Klein was the subject of statehouse controversy in February when he tweeted a picture of himself shaking Governor Branstad’s hand moments after the governor signed the collective bargaining bill into law.