You are here: Home / Fires/Accidents/Disasters / Ice cream spills out after semi is hit by train in Le Mars 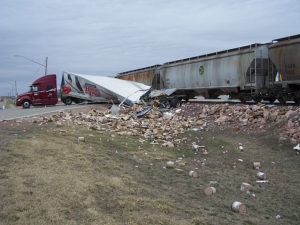 Ice cream spilled out of this semi trailer after it was struck by a train in Le Mars.

Large and small cartons of ice cream spilled out at a railroad crossing in Le Mars this morning  after a train struck the trailer of a semi.

“It was struck by a southbound CN train here at 18th Street and what we call southbound Business Highway 75,” according to Schipper. “We did have one injury, minor, to the truck driver. He was transported to Floyd Valley Hospital.”

The name of the truck driver has not been released. The accident happened at about 10:40 a.m. and destroyed the trailer hauling the frozen desserts. 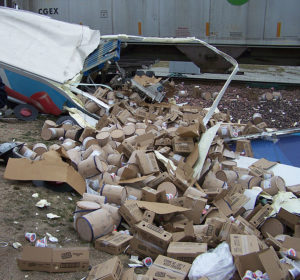 Dozens of containers of all sizes of ice cream after the accident.

“We have ice cream strung out in the ditch here and parts and pieces of the trailer down the tracks for I’d say a good city block or a block and a half,” Schipper says.

Firefighters had to wait for the power to be disconnected to one of the crossing signals that ended up under the semi trailer before they could clean up the spilled ice cream that was mostly contained to its packaging. There was some diesel spilled from the truck.

The fire chief says the lights and crossing arms were working at the time of the accident. He says it’s at least the third truck train accident at this crossing in the city in the last seven years.