You are here: Home / Health / Medicine / Iowa cancer cases projected to be up while deaths go down 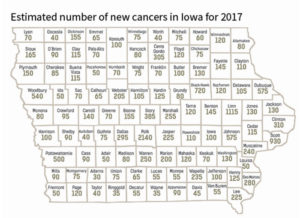 The annual report on cancer from the State Health Registry in the University of Iowa College of Public Health finds the number of cancer cases this year are expected to be up — with the number of deaths down.

Doctor Mary Charlton revealed the findings of the report today. “We estimate there will be 17,400 new cancers diagnosed in Iowa this year — which is an increase from last year — because cancer cases have not been declining as quickly as estimate, so numbers had to be adjusted up,” Charlton says.

Charlton says the new estimate is 800 more cancer cases than last year as the decline in the number of breast and colorectal cancer cases has been slower than projected. She says this is possibly due to an increase in risk factors such as obesity and an aging population.

While the projected cases of cancer are up, the number of people expected to die of cancer this year is down by 200. “We estimate there were be 6,200 cancer deaths among Iowans this year,” Charlton says, “…2,900 will occur among females and 3,300 among males. These estimates are down slightly from last year.” 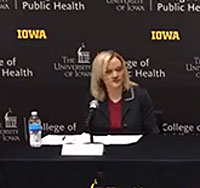 Charlton, who is an assistant professor of epidemiology at the U-I broke down the cases for women. She says half the new female cases of cancer will be breast, lung or colorectal cancer and the other quarter will be among the top ten cancers in their report and the rest will be the less common cancers.
Charlton says the top cancers in men are similar to what they’ve seen in the past.

“Among males, about 40 percent of new cases will be prostate, lung or colorectal cancers. These three types of cancers used to make almost half of all cancer cases for males,” Charlton says,”but the number of prostate cancers has substantially declined in the last few years — likely due to the recommendations against PSA screenings by the U.S. Preventative Services Task Force in 2012.”

She says 1,670 people are projected to die from lung cancer in our state this year. “Not that lung cancers deaths alone will exceed the combined total of number of colorectal, pancreatic, breast and prostate cancers,” Charlton says. You can find out more about the report on the State Health Registry of Iowa’s webpage