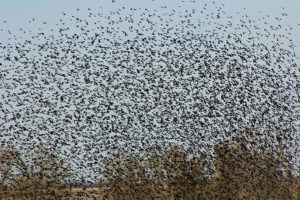 Look! Up in the sky! It’s a super-sized flock of birds! Iowans are seeing huge congregations of feathered creatures filling the morning and evening skies, giant clouds of birds that often take several minutes to pass.

Steve Dinsmore, a central Iowa ornithologist and bird watcher, says it’s typical during the spring and fall to see the birds migrating in tremendously large numbers over Iowa.

“Those could represent a number of different species of birds,” Dinsmore says. “One of them is European starlings, so we call those a murmuration of starlings. We also, right now, have very, very large numbers of blackbirds, primarily redwing blackbirds and common grackles, and also other species that are also migrating. Those birds, just like starlings, form these large, wavy, meandering flocks.”

Dinsmore is a professor of Natural Resource Ecology and Management at Iowa State University. He says birds of a feather do flock together for several reasons. “One of them certainly deals with predator avoidance, a sort of safety-in-numbers component,” Dinsmore says. “These birds also feed en mass so one of the other advantages of them associating in flocks is the transfer of information about foraging sites or feeding sites. They do that through these large flocks as they’ve moving to and from roosting and feeding areas.”

The miles-long undulating flocks are fascinating to watch and may contain tens of thousands of birds, perhaps more. “One of the real fun questions to try and answer is, ‘How many are there?’ and certainly, those flocks are very, very large, to the point where you can’t count individuals,” Dinsmore says. “Sometimes, we use estimation techniques or approximation techniques. Pushing 100,000 is pretty unusual but there are records in the hundreds of thousands and some estimates even up to a million individuals.”

Robins are out in plentiful numbers this spring, and some Iowans who live in larger cities are being surprised to spot wild turkeys in their back yards, though they’re typically thought of as county birds.

“Those birds, in some cases, do pretty well in urban environments,” Dinsmore says. “It also turns out, because we just came off of a really mild winter, many species of birds, turkeys included and other game birds and other song birds, probably are going to do really well this year because they were able to survive what turned out to be a relatively mild winter.”

The waterfowl migration is also at its peak now in Iowa and in some areas, “spectacular numbers” of geese and ducks have arrived early and are staying later.