You are here: Home / Fires/Accidents/Disasters / Wisconsin man thanks Iowans who saved his life after accident 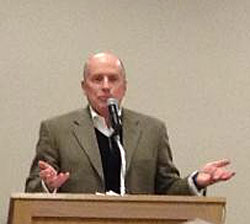 A northeast Wisconsin man traveled to eastern Iowa this week to thank the people who saved his life over three months ago.

Dan Clarahan was in Cedar Rapids in early December when he went into cardiac arrest and crashed his vehicle on Highway 30. He spoke with KCRG-TV on Tuesday.

“The heart attack I had, I was literally dead,” Clarahan said. Coincidentally, Clarahan was in Cedar Rapids for the funeral of a family member who died from a heart attack. Two witnesses stopped to help Clarahan, who was fortunate to survive for several reasons.

“Not actually crashing into anything and having two absolute angels pull me out of the car, perform CPR and call 911,” Clarahan said. Sara Jansen told KCRG she was one of the first people on the scene.

“I saw Dan laying there, realizing this is the real thing, so I said ‘I know CPR can I help?'” Jansen said. Ambulance crews took over CPR and brought out a defibrillator, but first responders said Jansen’s actions were key to saving Clarahan’s life. Clarahan had a steady heart beat by the time he got to the hospital. Doctors put in two stints and just days later, Clarahan made a full recovery. Clarahan met Jansen, cognitively, for the first time Tuesday afternoon.

“A Saturday in December Cedar Rapids, Iowa, where its not rainy or snowy or snowy, it was daylight not night time,” Clarahan told KCRG. “I don’t know the odds of that happening, but Iowa is a special place, Cedar Rapids is a special place.” The 59-year-old Clarahan, who’s from Askeaton in Brown County (Wisconsin), is a business consultant. He’s married with two adult daughters. Clarahan said he plans to learn CPR himself and he’s encouraging friends and family to get tested for heart disease.