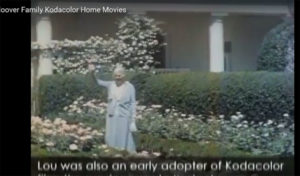 Screen shot of Lou Hoover in a color movie.

The Herbert Hoover Library and Presidential Museum in West Branch is getting ready to unveil restored movies that are believed to be the first color movies taken on the White House grounds in Washington, D.C.

Archivist Lynn Smith discovered that the 7 reels of film that originally had been preserved as black and white might be actual color film.

“I noticed these lines in the image, and it was a black-and-white image,” Smith says. But she says the film said it was Kodacolor and she had to do some research to find out what Kodacolor film is all about. Kodacolor was created in 1928 as Herbert Hoover was coming into office and she learned the lines she was seeing were lenses on the back of the film that turned it into color.

“My goal then was to find a way to reach back with technology’s help through 80 years of time and bring them into the future, into today’s realm. So, I applied for a grant from the National Film Preservations Foundation and worked with a vendor in Rockville, Maryland,” Smith explains. They were able to convert the 7 films into digital files. Smith knew from watching the black-and-white versions of the films that they were scenes shot by Herbert Hoover’s wife Lou of on the grounds of the White House.

“Not only are they kodacolor and it’s rare — this is probably the first color film of White House activities. There’s a little snip of the Easter Egg hunt, Maypole dancing,” Smith says. The Kodacolor film was made by Eastman Kodak from 1928 through 1935 and was the predecessor to the Kodachrome film. She says Lou Hoover had already been shooting black-and-white movies, and was very interested in new technology and probably got the color film soon after it came out. Smith says there aren’t any real new historical revelations in seeing the film in color — though it adds to the personality of the people.

“In a way it was just sort of nice to reveal the human side….these color films of the medicine ball game. We have other black-and-white films of medicine ball, but the color captures a little bit more of the facial expressions and the group dynamic of them playing what looks like bull in the ring, king of a keep away,” according to Smith. She says the videos do show a more human side of Lou Hoover. She says you see her walking through the gardens and interacting with the workers and Lou Fields, one of the head butlers who worked at the White House a long time and for several presidents.

“The Hoovers sometimes would get a bad rap for not interacting with the workers. But she is with them and looks to be chatting with them,” Smith says. You can see one clip from the movies now on the Hoover Library page, and the rest will soon be unveiled.

“Mrs. Hoover’s birthday on Wednesday March 29th is our big grand unveiling where the Youtube channel will have all seven films from start to finish available to watch,” Smith says. “And then here at the Hoover Museum starting at 9:30 on every half hour…we will be showing the Lou Movies in our auditorium.” You can see the movies at: www.youtube.com/user/HooverPresLib.

Here’s the excerpt of the videos shown on Youtube: