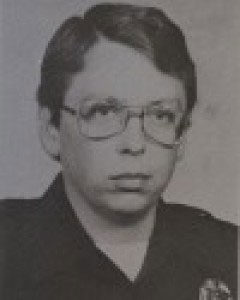 A man who was convicted of killing a central Iowa police officer nearly 32 years ago has died in prison.

On September 3, 1985, Gladson and Dennis Lamar robbed a HyVee grocery store in Newton and during their getaway, shot and killed Newton Police Officer Daniel McPherren.

Newton Police Chief Rob Burdess says his department recognizes the anniversary of McPherren’s death, in some way, every year. “Just the comments we get from community members who say, ‘man, I remember where I was at when I heard about this,’ it’s just like any other tragedy we’ve had around the nation. For our community, that was big and a lot of people reflect back on that,” Burdess said. “They remember the intimate details of what they heard, what their parents told them, or where they were at that day.”

Prior to the robbery and murder of Officer McPherren, Gladson and Lamar had escaped from a minimum security prison in Newton. After the shooting, there was a high speed car chase, but Gladson and Lamar eventually lost police.

“That added another level of concern for the community and the law enforcement community, in general, because they didn’t know where they were at. There were hours and hours of a manhunt to try and find these two guys,” Burdess said.

Gladson was captured the next day in Des Moines, but Lamar was not captured until several weeks later in Minneapolis. Lamar, who is now 69, continues to serve a life sentence at the Iowa State Penitentiary.

Officer McPherren, who served with Newton Police for 11 years, was survived by his wife and three children. Burdess called McPherren’s family this week when he learned Gladson was near death.

“There are not many cop killers in prison in Iowa, so we knew it would likely be a news story and we did not want them reading it in the newspaper,” Burdess said. Only one other Newton Police officer has died in the line of duty. Officer Bobby Barrickman was killed in 1979 when his squad car was hit head-on by a vehicle that was drag racing. Barrickman was 33.