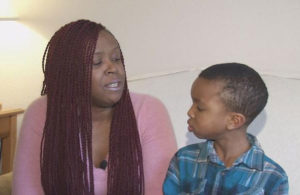 A seven-year-old Dubuque boy who jumped out of a window of his burning home says he was afraid he would break his legs. The fire happened Tuesday afternoon.

Latoya Marxson told KCRG-TV she was making lunch for her son, Catonious, when she left the kitchen for an important phone call. Soon, the smoke alarm sounded and she returned to find the kitchen full of smoke.

“It was a nightmare. It happened so quick,” Marxson told KCRG. Unable to get through the kitchen, Latoya said she was forced to exit the home with her son in his upstairs bedroom. She ran to the back of the house and shocked to see flames. Catonious said his room was filling with smoke.

“I opened the front window, but I couldn’t get the screen open, so I had to bust it open,” Catonious said. Police Officer Dane Cox arrived at the home and coaxed the boy to bust out the screen, drop his dog out the window, and then jump out the window himself. Officer Cox caught Catonious with the help of the boy’s mother.

“I thank (police) and I thank the fire department,” Latoya said. Catonious told KCRG he was scared no one was going to catch him and the leap would break his legs. He wasn’t injured, but he did spend a night in the hospital for treatment of smoke inhalation.