You are here: Home / Business / Iowa unemployment rate drops again in February to 3.2% 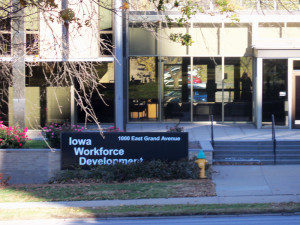 More Iowans went off the unemployment rolls in February as the rate dropped for the fifth straight month to 3.2 percent.

Iowa Workforce Development spokesman, Cory Kelly, says the state is pushing toward full employment — but that number is not exactly known. “We’re having those discussions, as a matter of fact a year ago our analysts were sitting around discussing that very same thing, thinking 3.4 or 3.5 percent was full employment,” Kelly says.

Full employment means most of the people who want a job have one, but it isn’t zero unemployment as some people are  in transition between jobs.

Kelly says they don’t know if the unemployment rate has hit bottom yet. “Only time will tell how low that will go,” Kelly says. “It’s been a long time since we’ve been at this rate. It looks like June of 2001 was the last time we had a 3.2 percent unemployment rate.” The rate was 3.8 percent last February. He says the private sector led the move that saw some 3,000 jobs created in February.

“Leading that private sector growth was the education and health services sector — which added 1,800 jobs in February. This is fueled by hiring in private education with added the majority of the jobs, 1,300. Although healthcare also expanded their payrolls, up 500,” Kelly says. The construction industry added 1,600 jobs last month and Kelly says the weather continues to be a big positive for the industry.

“Without question, our unseasonably warm winter and the unseasonably early beginning to the spring has had a big impact in that sector,” Kelly says. He says the leisure and hospitality sector was one area that lost jobs.

He says the jobs were lost in both recreational activities, hospitality, and eating and drinking places but the sector is up 2,000 jobs for the year. Kelly says information services was down 400 job and manufacturing lost 200 due to cutbacks in durable goods.