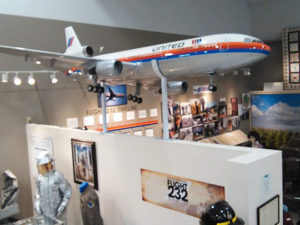 The Mid America Museum of Aviation and Transportation has ended years of searching after finding a model of the DC-10 like the one that crashed at the Sioux Gateway Airport in 1989.

Museum director, Larry Finley says they started searching for a model of the plane two years before the 25th anniversary of the crash of Flight 232.

He says they went through the 25th anniversary without out a large-scale model, and about six months later he got a phone call from a man who had a 1/12 scale model. Finley says this model has a 13-foot wingspan.

The model was just a short distance away in Moorland, near Fort Dodge. Finley says they made change to the model to fit into the exhibit. He says one of the boardmembers took the plane to his workshop and repainted it into the colors of the plane that landed there in 1989.

There were 296 people on board the plane when it suffered engine failure and 185 survived after it made the emergency landing. Finley says one side of the model is clear and you can see inside. He says it adds perspective to the work the emergency responders did to save the lives of so many passengers on that day.

“It lights up inside so people can see the seating configuration, and adds quite an impressive unit to our 232 display,” Finley says. The model now hangs above the Flight 232 exhibit at the museum in Sioux City.