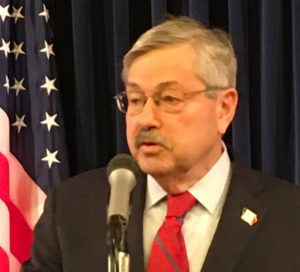 There’s disagreement among Iowa’s Republican governor and Republicans in the legislature over the minimum wage.

The issue may be debated in the Iowa Senate today as senators consider a bill that would nullify four county minimum wage increases and declare the statewide minimum wage remains at $7.25 an hour.

“I understand the interest in having a uniform minimum wage throughout the state,” Branstad said at the end of his weekly news conference. “I support that. I think not having that creates a lot of uncertainty and a lot of problems, but I would prefer we consider a modest increase over time as some of our neighboring states have done.”

House Speaker Linda Upmeyer — the top Republican in the legislature — said last Thursday that Republican lawmakers do not plan to increase the state’s minimum wage.

“The governor and I have not discussed that topic,” Upmeyer told reporters.

“Oh yeah, we’ve had discussions about this and I’ve indicated my support for a modest increase, over time, in the minimum wage,” Branstad told reporters this morning.

Earlier this month, Republicans in the Iowa House voted down Democrats’ proposals to raise the minimum wage. House Majority Leader Chris Hagenow, a Republican from Windsor Heights, says a hodge-podge of minimum wage rates are springing up around the state, as some cities within the four counties where the wage rate was raised are opting out.

“It absolutely highlights the need for one, uniform, statewide minimum wage which absolutely was the priority of what we have gotten done this year,” Hagenow said during a news conference.

On March 9th, 56 House Republicans approved that bill that gets rid of the four counties’ minimum wage hikes and sent it to the senate for consideration. Branstad this morning held out hope Republican senators may consider adding a minimum wage hike to the legislation.

“It’s the art of what is possible,” Branstad told reporters. “We want to work with the legislature to see what can be accomplished.”

Iowa’s current minimum wage is identical to the federal minimum wage. Twenty-nine states currently have statewide rates that are higher than $7.25 an hour. Missouri, Nebraska, Minnesota and Illinois all have higher base wage rates. Republican leaders in both the House and Senate say they will not consider a separate bill to raise the minimum wage this year.