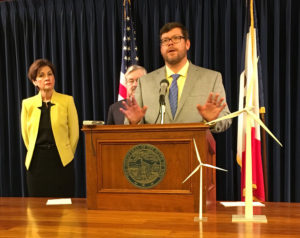 John Boorman of the Iowa Wind Energy association with the governor and lieutenant governor.

It is “wind energy day” at the Iowa state capitol and industry executives says they’re hopeful the Trump Administration will keep the tax credit for production of wind energy.

According to John Boorman of the Iowa Wind Energy Association, more than 36 percent of Iowa’s electricity is currently powered by wind turbines.

“Sounds like any easy number to say, but think about it — 36 percent, nearly one third of our power from wind in the state of Iowa,” Boorman said during Governor Branstad’s weekly news conference. “It’s amazing.”

Doug Spoon is general manager of TPI Composites in Newton where the blades for wind turbines are made. He said Iowa has established “dominance” in the wind energy industry.

Spoon indicated wind industry executives were keeping on eye not only on the federal wind production tax credit, but on any import tax that might raise the cost of parts shipped into the U.S.

Candidate Donald Trump criticized wind turbines in 2015 and 2016, saying the technology is too expensive and the industry cannot survive without the tax credit companies get for producing energy from a wind turbine. Governor Terry Branstad told reporters “that was before the election” and Trump has assured him the wind production tax credit will remain.

“I know there are those that would like to undo some of the things that have been done, but I feel confident it’s going to be maintained,” Branstad said. “And I think that President Trump recognizes how important renewable energy was to his victory here in Iowa and the heartland.” 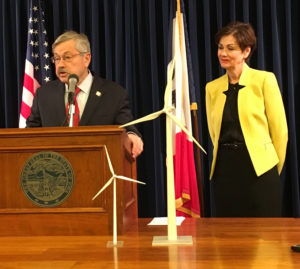 Branstad said there may be another key advocate for the wind industry inside Trump’s cabinet. Former Texas Governor Rick Perry is now Trump’s energy secretary. Texas is the nation’s number one wind energy producer.

A new analysis concludes there could be a quarter of a million jobs in the U.S. wind energy sector by 2020. The same report commissioned by the American Wind Energy Association concludes Iowa will remain the number-three state in wind energy jobs, behind Texas and Colorado.