You are here: Home / Sports / Can Medved build a winner at Drake? 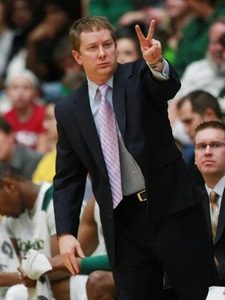 After turning the basketball program around at Furman Niko Medved will try to do the same at Drake. Medved was introduced as the Bulldog’s new head coach this afternoon.

“I am extremely excited to welcome Niko Medved and his family to Drake University,” said Drake Director of Athletics Sandy Hatfield Clubb. “Niko has built a championship program centered on student-athletes who thrive in the classroom and on the basketball court. He is a tenacious and passionate recruiter whose vision for success aligns with the tenants of The Bulldog Way touchstone. His strong Midwest ties and his proven success at a highly academic institution make him a perfect fit to lead the Bulldogs.”

Medved spent four season at Furman and built a program trhat won nine games in his first year to this season when the Paladins won the Southern Conference regular season championship and a second-straight appearance in the CollegeInsider.com Tournament. Medved has guided the Paladins to the semifinals of the postseason tournament with a 23-11 record to date this season. The Paladins continue their quest for the CIT championship on Wednesday.

“I am ecstatic about the opportunity to be the next men’s basketball coach at Drake University,” said Medved. “Drake University’s tremendous reputation partnered with its strong leadership and the thriving Des Moines community make this a special place. I was born and raised in the Midwest and have so many strong roots in this part of the country. My family and I can’t wait to get started.”

He will need to do some heavy lifting at Drake. The Bulldogs are coming off a 7-24 record this past season, the third straight year that failed to reach double digit victories.