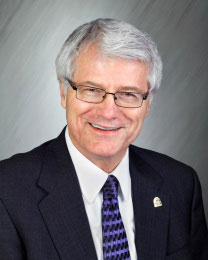 The board that oversees the three state-funded universities today approved the appointment of former UNI President Benjamin Allen to be the interim president of Iowa State University.

Board of Regents president Bruce Rastetter read a motion asking for approval of Allen to serve during the search to replace Steven Leath, who is leaving ISU for Auburn University in May. “Effective May 9th, 2017 and continuing until a new president is appointed and assumes office,” Rastetter read.

Rastetter says Allen will start at ISU with a different position and then become interim president over once Leath leaves. “In order to facilitate a seamless transition, Doctor Allen will be granted an initial appointment as a senior policy advisor, effective April 17th through May 8th. Doctor Allen’s annual salary in these positions will be $525,000,” Rastetter says.

Allen is familiar with the Ames campus, he was the provost at the school before leaving to become UNI’s president. The board also approved moving ahead with a search committee to find Leath’s replacement.

“The first part of the process will be confidential, where the committee will interview candidates, select 10 or 12 candidates — that will be the committee’s decision — and then bring the finalists to campus,” according to Rastetter.

There will be an update on the presidential search at the regent’s meeting in April.