You are here: Home / News / Supporters gather around mosque in Cedar Rapids 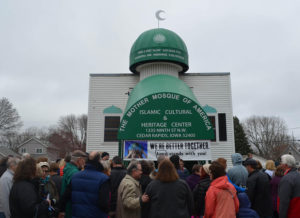 Hundreds of people gathered outside a mosque in Cedar Rapids Sunday to show support for the Muslim community. Event organizer Erin Bustin said she wanted the rally to show the world that Iowans stand for diversity and peace.

“Today, Iowans stand with, alongside, and later around our Muslim friends and neighbors to tell you that you are loved, you are welcome and you are part of us,” Bustin said.

The crowd formed a circle around the Mother Mosque of America as a symbol of support. Muslim, Christian, Hindu, Jewish, Sikh, Native American and atheist leaders spoke about equality, acceptance and love. The interfaith rally was meant to counteract recent hate crimes and 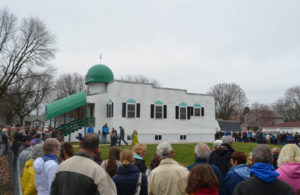 “We want you to know that your support and encouragement to your fellow citizens, your Muslim neighbors, are the fuel that keeps us going. It is like when the rain comes on the dry land and then causes it to grow again,” Tawil said. Speaking with KCRG-TV following the event, Tawil called it an overwhelming experience.

“Our God, the God that we worship, answered our prayers with a bright day,” Tawil said. The Mother Mosque of America is the longest standing mosque in North America. It was built in Cedar Rapids in 1934.