You are here: Home / Education / Seymour students back to class at former nursing home after tornado 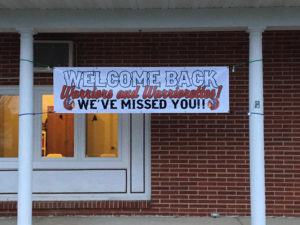 Sign on the nursing home converted to classrooms in Seymour.

A building that once served the oldest residents in the southern Iowa town of Seymour is now back open serving the youngest members of the community.

“Once the tornado came through we knew we needed a new school in order to have classes going on,” Breon says, “and fortunately in town..there was a closed nursing home. It had been sitting there for a couple of years and the city owned it and it was a great opportunity for use to use and after about two weeks of the community coming together and whipping it into shape, were able to get back in there.” 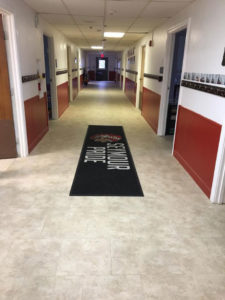 A hallway in the temporary building.

Breon says he isn’t surprised how quickly everyone came together to get the nursing home ready. “You know in southern Iowa in small towns that just happens, you don’t have to ask, and you don’t have to beg for that kind of stuff, it just shows up and they just all dug in,” Breon says. “It was amazing the amount of people in the community — and even the communities around us that gave us support and help.”

The 300 or so students started classes again Monday and Breon says the toughest part was moving salvaged items to the new building. “I think the biggest thing was trying to get stuff out of the old building and getting it into the new facility. That’s kind of been a nightmare with the requirements of cleaning a building after a tornado,” Breon explains. He says they had to check to be sure there wasn’t any asbestos or other contaminants on the items they were removing from the damaged building.

Breon says the students have handled the whole thing very well and in fact were itching to get back to school. “It’s kind of like the first day of school again, I think the kids were excited. It was a new environment. They’ve done very well,” he says. The students weren’t the only ones happy to see school back in session. 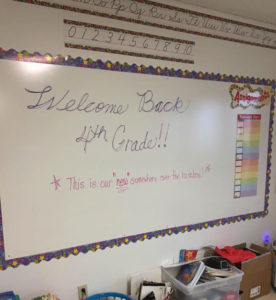 A message from a teacher to students on the first day back to class.

A few of the days off were part of spring break and the Seymour district is on an hourly calendar, so Breon says they will be able to make up the time missed without many adjustments. While the kids are settling in to their new temporary classrooms, Breon has to think ahead to next year.

“I think the big challenge ahead of us is getting some of the parts of the old building down and then moving on to reconstruction. That’s going to take some time,” Breon says. They are still waiting to see how much of the damage is going to be covered by their insurance.

The tornado struck after eight o’clock at night and the superintendent says they were fortunate no one was in the buildings at the time it hit. He does says however, they were happy to learn the areas of the building that were not damaged are the areas where the students would have been. The National Weather Service says the tornado was rated EF-2, was on the ground for 12 minutes.