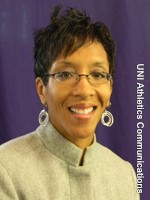 “I am humbled, blessed and extremely thankful to David Harris, Christina Roybal and President Mark Nook for entrusting me to continue lead this program over the next several years,” said Warren. “I look forward to continuing to work closely with my staff as we strive daily to help our young women develop both on and off the floor.”

Warren, who is the all-time wins leader at UNI with 186 career victories, guided the Panthers to their third NCAA Tournament appearance in 2016-17. The Panthers posted 24 wins for the second consecutive season and earned the program’s first at-large berth into the NCAA Tournament. UNI was a No. 10 seed and played No. 7-seeded DePaul in Starkville, Mississippi.

“Tanya continues to do a phenomenal job with our women’s basketball program,” UNI Director of Athletics David Harris said. “From last year’s regular season Missouri Valley Conference championship to earning our first-ever NCAA at large bid this year, we have enjoyed great on court success.

The Des Moines native is a three-time Missouri Valley Conference Coach of the Year. She has led UNI to 17 or more wins in eight straight years and an upper-half finish in the MVC in each of the last eight seasons – both of which are the longest active streaks in the MVC.