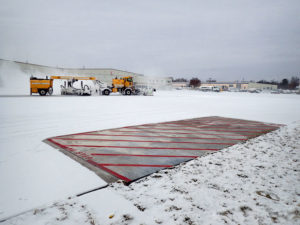 A heated section of pavement during a snowstorm.

An Iowa State University researcher’s project will warm the hearts of anyone who has ever been forced to sit on an airplane waiting for snow and ice to be cleared.

Halil Ceylan and his research team from ISU’s Program for Sustainable Pavement Engineering and Research installed two test slabs of electrically conductive concrete into the apron at the southwest corner of a hangar at the Des Moines International Airport.

Ceylan says they’ve mixed carbon fibers into part of the concrete to allow it conduct electricity, and then they place electrodes into the slab and those are connected to electricity to generate heat. Ceylan says the electricity can be turned on automatically with a sensor and heat the pavement to the desired temperature.

“In the lab environment sometimes my students view samples and we can actually achieve over 200 degrees Fahrenheit. But obviously one does not need such high temperatures, so what we envision, we want to keep temperatures around 40 degreesish,” he explains. 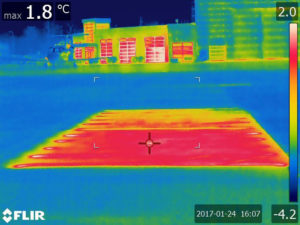 Ceylan says they’ve studied the roughly 15 by 13 foot test slabs during a snowstorm in December and found it took about 19 cents to heat each square foot. He says the installation cost is higher at the start, but the cost to run the system is economical, and there are other benefits.

“Even if you have a snowplow go through a concrete pavement, you will still leave a thin layer of ice and snow on it,” Ceylan says. “But when you turn our system on, you will have a good dry surface.” Ceylan says airports would need fewer snowplows, buildings and people to drive the plows — which would save them money. He says the heated concrete cuts down on delays at the gates and eliminates the need to run plows into gate areas were planes are parked getting fuel and loading luggage.

Ceylan says those areas are every congested, and there is currently a lot of chemicals used to deice things. The heated pavement would eliminate the use of chemicals that have to be cleaned up and be more environmentally friendly. The testing of the system was slowed by a mild winter that didn’t produce many snow storms, but Ceylan has seen enough to move forward.

Ceylan says as more airports decide to use the system, it will create a demand that is good.”As the technology picks up, the construction and implementation costs are going to go down, as there will be a market for this,” Ceylan says.

The test slabs at the Des Moines airport are seven and a half inches thick. The bottom four inches are regular concrete, the top three-and-a-half are the electrically conductive concrete. The Federal Aviation Administration’s Center of Excellence Partnership to Enhance General Aviation Safety provided $2.2 million for the research.