You are here: Home / Crime / Courts / Saturday is the deadline for Community Hero Award 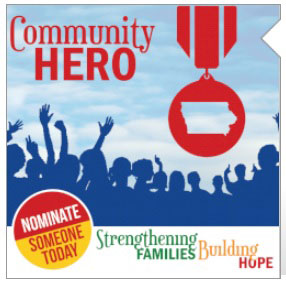 This Saturday is the deadline for nominations for the Community Hero Award for Iowans who have gone above and beyond to strengthen families while preventing child abuse.

Deb Cox, executive director of Prevent Child Abuse Iowa, says up to ten people will be singled out for the awards statewide.

Cox says, “The purpose of this award is to really recognize the people who are working at the local, community level on a daily basis, working to change and improve the lives of our children and families.”

The winners will be recognized during the annual Child Abuse Prevention and Family Support Conference which is scheduled for early May at the Iowa Events Center in Des Moines.

“The conference has had sell-out registration the past three years and we expect that again this year,” Cox says. “We take up to 600 registrants for the conference. It’s three days of training and networking and skillbuilding.” This Saturday, April 1st, marks the start of Child Abuse Prevention Month in Iowa, with a goal of informing the public about the problem.

“Child abuse is an ongoing problem and it has been for eons,” Fox says. “The work of prevention is to build the strength at the local community level, to be able to recognize the signs and symptoms of families at risk and then support those families so abuse doesn’t occur in the first place.” Cox says statistics on child abuse in Iowa for 2016 will be released in a few weeks. In recent years, she says cases of physical and sexual abuse have remained steady statewide while neglect cases have risen.

Learn more and find nomination forms for the Community Hero Award at: www.pcaiowa.org