You are here: Home / Agriculture / Ag business owner with humble roots is named Iowa’s Small Business Person of the Year 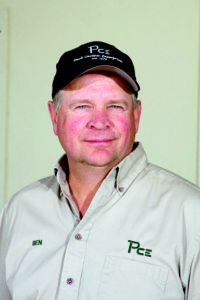 A western Iowa man who made extra money years ago pumping and hauling liquid manure for area farmers now runs a multi-state agricultural business with 60 employees.

Ben Puck, the CEO of Puck Custom Enterprises, is being named the Iowa Small Business Person of the Year by the U.S. Small Business Administration. Puck’s company is based in the Carroll County town of Manning.

“We build and manufacture equipment for the livestock industry,” Puck says, “manure application and nutrient application for the state and for surrounding states.”

Puck launched the venture with his brother in 1979. As business grew, Puck designed ways to improve the manure application process and now holds five patents for his inventions. His company’s equipment is now being used on hundreds of farms across the region.

“We’ve really only been formally building equipment for a little bit less than ten years for sale to the market,” Puck says. “We brought a lot of the things that we learned in the previous years to market so we could better help everyone else’s efficiency to get this job done every year.”

PCE’s primary focus now is designing, building and selling equipment for manure management. All four of Puck’s adult children work for the company in diverse roles ranging from engineering to graphic design to marketing. The 57-year-old says he’s had to diversify himself, too.

Puck says, “My job has changed quite a bit from being the guy that pumps cesspools to the guy that now tries to understand what a CEO is all about.”