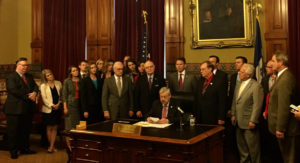 Governor Terry Branstad has signed two bills into law that have been priorities for Iowa businesses. The first revamps the state’s workers compensation system.

“We had a lot of problems and the costs were going up and we’re not competitive with our neighboring states,” Branstad said during a bill signing ceremony in his statehouse office. 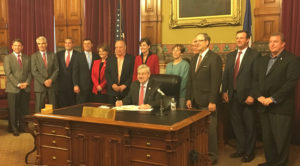 Supporters of the minimum wage bill joined Governor Branstad for the signing.

“Different county minimum wages creates confusion in a county, especially for cities that are located in more than one county and we’ve already seen where some counties have gone to a higher minimum wage and some cities have opted out,” Branstad said during a separate ceremony.

AUDIO of signing of preemption bill

“Uniformity throughout the state of Iowa provides local governments and businesses with predictability and predictability is really important for business decision makers,” Branstad said.

New standards for how workers who get injured on the job are treated go into effect July 1.

“This is something that I care deeply about,” Branstad said. “It’s something that I’ve worked hard…for over a long period of time and I believe in the long term it’s going to restore Iowa to the kind of competitive situation we want.”

Critics accuse Branstad and his fellow Republicans in the legislature of pursuing an “anti-worker” agenda.

“When do we start standing up for the common man and the common woman of this state?” Senator Pam Jochum, a Democrat from Dubuque, asked during Senate debate Monday night.

Senator Bill Dotzler, a Democrat from Waterloo, worked at the John Deere Waterloo Works for 31 years and, during that same debate, suggested the state was in “deep, deep trouble.”

“This state’s got a real problem and the thing that we needed to be doing is supporting our young people instead of passing laws that are going to hurt ’em in the workplace, make ’em wonder about going somewhere else,” Dotzler said.

“It’s a major piece of legislation that also ensures that we have an environment where job creators in our state — manufacturers critical to our state’s employment and critical to the state’s growth in employment — can operate with the clear expectation and understanding that they’re not going to find themselves in court dealing with these issues and the unpredictable costs that are associated with that,” Dix said during a news conference in his statehouse office.

Democrats also question the GOP’s commitment to the concept of “local control” since one of the new laws overturns the minimum wage decisions of boards of supervisors in four counties. Republican House Speaker Linda Upmeyer of Clear Lake today said having a uniform, statewide minimum wage will be a boost to the state’s economy.

“There are jobs when you create a consistency and stability and predictability around the state for the people that create the jobs,” Upmeyer said during a news conference on the floor of the Iowa House earlier this afternoon.