You are here: Home / News / How might the ATV legally cross the road? At an angle 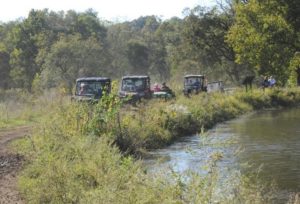 The Iowa House and Senate have approved a bill that could make it easier for an all-terrain vehicle to get from point A to point B when there’s a public highway in between.

ATVs will not be able to join the cars, pick-ups and semis that drive down any “primary” highway in the state if the bill becomes law, but the legislation would let many all-terrain vehicles drive across a highway.

Under current law, city and county officials may get a permit from the state Department of Transportation to establish ATV crossings at specific points along a primary highway. This bill does away with that process.

Senator Dan Zumbach of Ryan says ATV drivers will be able to cross any primary highway in the state under these circumstances: “The crossing has to be made at 90 degrees. 2. The ATV is brought to a complete stop before it crosses. 3. The driver yields to all oncoming traffic. 4. The crossing is made at an intersection of the highway and another street or highway and 5. the crossing is made at a street designed for an ATV trail”

Zumbach says the bill could provide an economic boost to the state.

“This is bringing together many of the ATV trails that have tried to survive and move forward in the state of Iowa,” Zumbach says. “And it’s just one step to make that economy spin even larger.”

Representative Scott Ourth, a Democrat from Ackworth, says it could reduce travel time for some farmers, too.

“I know those who haul feed back and forth and now will be able to simply cross the road rather than go some long, circuitous route to get to their feedlot across some road somewhere,” Ourth says.

The proposal has cleared the House and the Senate unanimously this month. It’s now up the governor to decide if the bill becomes law.