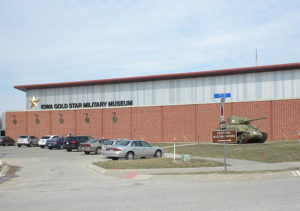 The Iowa Goldstar Museum at Camp Dodge near Johnston.

The Iowa Goldstar Military Museum at Camp Dodge near Johnston is holding a series of special programs Saturday to mark the 100th anniversary of the U.S. entry into World War One.

Museum curator, Mike Vogt, says Camp Dodge was created in 1909, but expanded as preparations for the war got underway. “During the first World War when the Army needed to expand drastically to make a difference in the war effort on the Allied side of the war effort, Uncle Sam needed real estate, and Camp Dodge was selected as one of the 16 training camps for the draftees who would soon be joining the Army,” Vogt says.

Draftees from the north-central part of the U.S. poured into the facility to be trained. “By war’s end Camp Dodge was the home to a peak garrison of 46,000 soldiers in July 1918, and over 1,400 buildings on a compound of about 3,200 acres,” Vogt explains. Soldiers were not only trained in Iowa to join the war, but many residents went “Over There” to fight for the U.S. 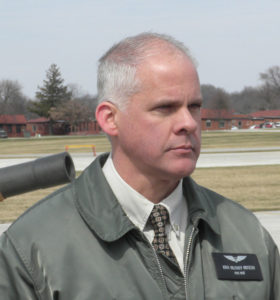 “Iowa’s contribution to the war effort was about 114,000,” Vogt says. “By the end of the war Iowa had incurred 3,576 casualties from disease, illness or combat with the enemy.” One of the Iowans who went overseas has a familiar name to those who live in or visit Des Moines.

“Merle Hay was one of the first three combat deaths sustained in World War One and he was the first Iowan to die in combat,” Vogt says. A street in Des Moines is named after Merle Hay and it runs by a shopping mall that also bears his name. The “War to End all Wars,” as it was called, was known for its fighting in long trenches dug along the battle lines.

The Goldstar Museum opened up a new exhibit just last year that gives visitors an interactive look at the conditions. “That allows visitors to immerse themselves in a World War One trench environment,” Vogt says. “Placed in the trench walls are exhibit cases showing the uniforms, the equipment, etcetera in that trench environment during that first World War.”

There will be a series of programs throughout the day Saturday, starting at 10:30. One of the programs highlights the exploits of an Iowa native, James Norman Hall, who fought for three countries.

“When the war started he was from Colfax, Iowa and was serving in the British Army. Came back to Iowa to tend to a sick family member, returned to France, joined the French Foreign Legion so he could become a flying in the French Air Service… At the end of the war he ended up transitioning in the American air service,” Vogt says. Hall was taken prisoner by Germany and later honored as a war hero. Hall went on after the war to write several successful books, including: “Mutiny on the Bounty,” “Men Against the Sea,” and “Pitcairn Island.”

The museum has a captured German war cannon and some vintage military vehicles along with special presentations. He says there will be some historical war gamers who will dioramas set up showing the trench system and explain the tactics and strategies of the war.

The museum is open from 10 a.m. until 4 p.m. on Saturday and admission is free.

Here is a schedule of the formal program Saturday:

1:30 – 2:15 p.m., Greg VanWyngarden presentation: “James Norman Hall: An Iowan serving under three flags.” Born in Colfax, Iowa, Hall served in the British Army during World War I, then became a pilot for France’s flying force, Lafayette Escadrille. Taken prisoner by Germany and later honored as a war hero, Hall wrote “Mutiny on the Bounty,” “Men Against the Sea,” and “Pitcairn Island.”