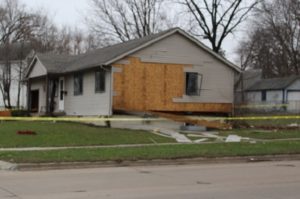 The state fire marshal is being called in to help determine the cause of an explosion last night that injured two people and severely damaged a Waterloo home.

Waterloo Fire Rescue Lieutenant Ben Petersen says a woman and her three children all escaped the blast and were transported to a local hospital for examination.

The mother was treated for minor burns and abrasions. Her daughter also suffered minor burns. The other two children were were not injured.

The explosion occurred around 9:30 p.m. inside a one-story home, which sits within a block of two gas stations.

Petersen said the blast caused significant damage to the entire house, which likely can’t be saved.

Fire officials believe natural gas likely triggered the explosion, but the cause hasn’t been determined. The investigation is expected to start today.