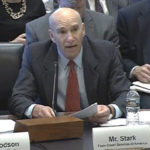 A Midwestern Farm Credit System official says although the farm economy is still struggling, the majority of producers are in “sound financial shape.”

Doug Stark is the president and CEO of Omaha-based Farm Credit Services of America (FCSAmerica). “We, by far, still have the majority of producers in really strong and sound financial shape,” Stark said. “They’ve built equity and they have working capital reserves.”

Land values are one indicator of the health of the farm economy, according to Stark. “When land comes up for sale in these local areas, there’s still pretty active bidding on it and that tells us that producers are still doing fairly well,” Stark said. He testified this week at a House Agriculture Committee hearing reviewing the Farm Credit System. FCSAmerica serves Iowa, Nebraska, South Dakota and Wyoming.