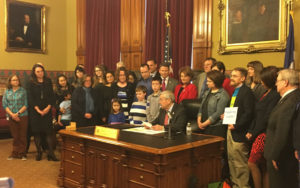 Specialized treatment for Iowa children and teenagers who’ve been diagnosed with autism will be covered under more insurance plans.

The governor has signed a bill into law that requires businesses with more than 50 employees and all local governments in Iowa that provide health care benefits to ensure this coverage is part of those insurance plans.

“Families and legislators from both parties have been working on this for about 10 years,” says Josh Cobbs of Sioux City.

He attended a ceremony in the governor’s office Thursday afternoon and celebrated with other families in the room as Branstad signed the bill into law. Cobb’s son, Noah, was diagnosed as autistic and Cobbs began lobbying for this law when Noah was five.

“He turned 17 in March,” Cobbs says. “For our families and families throughout Iowa it’s a big day. It’s a good start and a great step for Iowans to start accessing applied behavior analysis.”

“Access to this therapy is life-changing,” Cobbs says. “It’s helped our son with dietary issues, with hygiene issues, learning new skills. It’s changed out lives. There have been many families that have fought for this and I’m very proud of them and of Iowa today.”

The health care plans for state employees who are the parents of children with autism already cover this coordinated therapy, but it has not been required for health care plans offered by local governments in Iowa, including schools. Research has shown 87 percent of children show “significant improvement” or “achieve typical function” after getting the therapy.

About one out of every 68 children in the country have been diagnosed on the autism spectrum.

Similar insurance requirements are already in effect in 45 other states.