You are here: Home / News / Governor says Utilities Board chair did nothing wrong with outside legal work 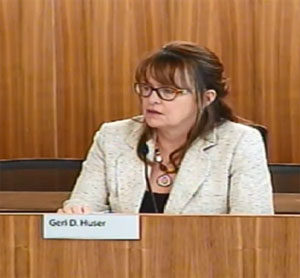 Governor Terry Branstad says the lawyer he has asked to remain as chairwoman of the Iowa Utilities Board has done nothing wrong in continuing to do outside legal work.

“It’s my understand that previous members of the utility board and chairs of the utility board have also had other jobs, done other things in their off-work hours,” Branstad says. Geri Huser — a Democrat who once served in the legislature — is an attorney who has continued to work in her family’s central Iowa law firm at the same time she’s had the full-time, paid position as chair of the Iowa Utilities Board.

An Associated Press report indicates Huser has represented 50 legal clients during the two years she’s been paid a nearly $130,000 a year state salary. Branstad has nominated Huser to remain as the board’s chair and state senators must confirm the appointment.

“I think she’s done a phenomenal job,” Branstad says. “And as I understand it, she’s disclosed all of the other things that she’s done on behalf of the firm with regard to filing papers or making (court) appearances, so I don’t think she’s done anything inappropriate.”

A spokesman for the Iowa Utilities Board told the Associated Press Huser uses “flex scheduling, takes vacation time or unpaid leave when she’s doing her outside legal work. The board has made some recent, high-profile decisions, like granting eminent domain authority to developers of the Dakota Access oil pipeline.