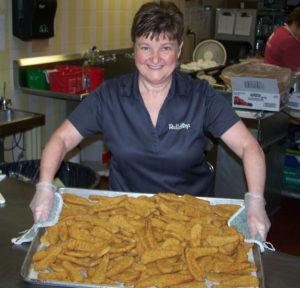 Several members of the School Nutrition Association of Iowa are in our nation’s capital to advise lawmakers about possible modifications and changes for school lunches.

The president of the association, Judy Lubben of Le Mars, say they will share a position paper with government officials that has their recommendations for school lunches. Lubben says they aren’t asking for anything major.

“Kind of staying the same, just laying low. We would like to bring back our 50/50 in our whole grains, and we’d also like to bring back some of the sodium levels — bring them back up — but just a little instead of decreasing it,” Lubben says. “Those are the two things. We are not asking for any money this year.”

During the Obama Administration school lunches saw a change with the addition of more fruits and vegetables to be served, and a reduction of calorie intake and calorie count to help fight child obesity. Lubben says since those changes were made, children have adapted well to the new meal plan. She says however the whole grains issue is something that causes concern.

“I just don’t think some whole grains agree with some children,” Lubben explains, “and I would like to see that 50/50 split and I think our participation would go up a little bit. Because that’s what they’re used to.” She says the kids don’t like some of the whole grain products, bread for example.

“They’ve come a long way with the whole grain white, but I think there’s still that taste and flavor there that the kids still don’t get,” Lubben says. Lubben says the group will meet with each the Iowa Congressional delegation, as well as with U.S.D.A. officials. The group is scheduled to be in Washington D.C. through Wednesday April 5th.