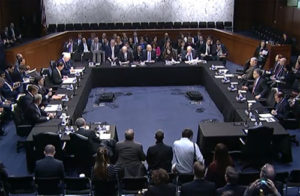 Senate Judiciary Committee members prepare for a vote on the Supreme Court nominee.

The U.S. Senate Judiciary Committee chaired by Iowa Senator Chuck Grassley voted to approve Neil Gorsuch for the open seat on the Supreme Court today on an 11-9 vote.

Grassley and the other 10 Republicans on the committee voted for Gorsuch, while all the Democrats voted against him. Before the vote, Grassley took those to task who said they would vote against the nomination because of the support for Gorsuch from advocacy groups.

“After reviewing 2,700 cases, more than 180,000 pages of documents from the Department of Justice and the George W. Bush Library, and thousands of pagers of brief he filed as a lawyer in private practice — all his detractors are left with is an attack on the people who support the nomination,” Grassley says. Grassley says it is interesting that liberals who oppose Gorsuch are now concerned about advocacy groups and their so-called “Dark Money” supporting the nominee. 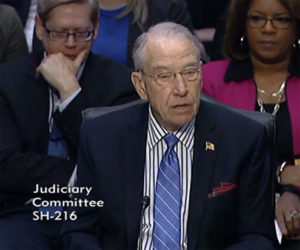 “To hear my friends on the other side tell it, it’s only conservatives outside groups who are engage in the nomination process,” Grassley says. “But we all know that isn’t true.” Grassley says advocacy groups ran ads supporting the last two Supreme Court Justices who were appointed by the then Democrat president.

“Where did their money come from? I don’t know and I suppose a lot of people think that I shouldn’t say I don’t care — but this is America. Where people can spend their money where they want to spend it. And they can use their money for political speech and any advocacy that they want,” according to Grassley. Grassley says

he found out first hand about advocacy groups pushing for judges when he announced they would not hold a hearing on President Obama’s nominee Merrick Garland or any other nominee until after the presidential election.

“All last year the groups on the left who coordinated an attack on me because I didn’t hold a hearing on Garland,” Grassley says. “They followed me all over Iowa, ran commercials, put up billboards, even had a plane pulling a banner over a special event in Des Moines. Can you imagine that plane traveling around Iowa with that banner saying ‘Grassley do your job’.” He says the advocacy groups also bought radio and TV ads to run in the campaign against him and in support of Garland.

“Now I’ve never heard any Democrat complain about all that money that was spent last year,” Grassley says. “We had a debate. I believe then and I believe now that we took the right course for the Senate and for the court.” Gorsuch’s nomination will now go to the full U.S. Senate, where it is unclear if there will be the 60 votes needed to approve his nomination — or if the so-called “Nuclear Option” will be used to approve him with a majority vote.