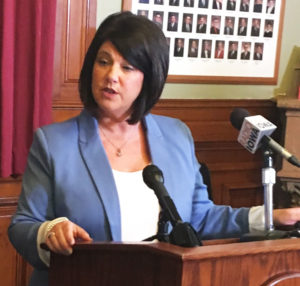 The state teacher’s union filed a lawsuit today challenging the new state law that restricts contracts talks for most public sector workers to a single subject: their base salary.

“Our goal is that this bad legislation is set aside and that the common sense law that was in place is back in place,” Iowa State Education Association president Tammy Wawro said during a statehouse news conference.

Wawro called the law unconstitutional because there are now two classes of government workers in Iowa since “public safety employees” were allowed to continue negotiating over a wide range of issues, including their insurance benefits.

“A dispatcher in some locals is able to bargain his or her health insurance, including family coverage, but members of our unit are no longer able to do that,” Wawro said. “Why are the dispatcher’s children more important than ours?”

The union’s lawsuit also challenges the new requirements for the voting that determines whether teachers and other public sector workers want to have union representation in the workplace.

“If a person is unable to vote, doesn’t wish to vote or is physically not available to vote, the law automatically counts their absence vote as a ‘no,'” Wawro said.

If these new rules were required for politicians, Wawro said 51 percent of the state’s entire population — not just the people who vote in the election — would have to vote for the same person to become governor.

“No election in the United States is based on this formula,” Wawro said, “and if it were, no candidate would ever be elected to office.”

No other state has such requirements for union organizing among government workers, according to Wawro.

“No social studies or government teacher in any public school in Iowa would tell you that this is what democracy looks like,” Wawro said.

The local union that represents teachers in the Davenport School District has joined the I-S-E-A’s lawsuit. More than 34,000 Iowa teachers are members of the Iowa State Education Association.