You are here: Home / News / Leaky crown of Iowa’s capitol being repaired 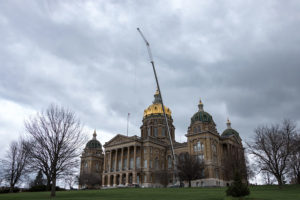 A crane looms over the Iowa State Capitol as repair work gets underway.

The effort to plug leaks at the Iowa capitol is underway.

Experts suspect the golden dome of the historic statehouse was struck by lightning a few years ago and it cracked the mortar underneath.

Moisture has been seeping side. Last spring legislators set aside $10 million to fix the problem, but the project was delayed so the dome wasn’t obscured during the National Governors Association meeting in Des Moines last summer.

Today, a crane has been extended up beside the dome and crew members say the scaffolding should be in place outside and inside by the end of the week. House Majority Leader Chris Hagenow of Windsor Heights says the 18-month project is part of maintaining the building. 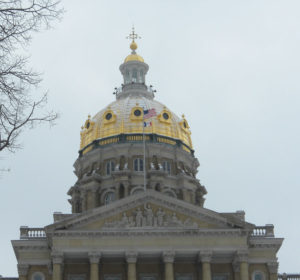 The dome of the State Capitol earlier this year with a dusting of snow.

“I love driving up to the capitol and seeing the dome,” Hagenow says. “It’s beautiful, but we need to fix it.”

Construction on the state capitol building in Des Moines began in 1871. The structure of the dome was completed in 1880. Gold leaf was applied to the exterior a couple of years later. That thin, 23-carat-gold skin on the dome is periodically replaced, most recently in 2005. Hagenow says legislators and the state’s governors have agreed not to let the building fall into disrepair.

“It’s a piece of our history,” Hagenow says. “It’s a cultural treasure for the State of Iowa and it needs to be maintained.”

The dome is made of steel and stone. The tip of the dome is 275 feet above the building’s ground floor. As of early this afternoon, scaffolding was being installed around that cupola or crown of the dome.