You are here: Home / Education / Thousands of students ready for robot competition in Council Bluffs 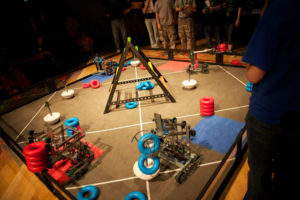 One of the planet’s largest robotics competitions for students in grades K-12 begins today in southwest Iowa.

Jim Schulte is president of the CREATE Foundation which will stage its U.S. Open Robotics Championship in Council Bluffs. There will be around 500 teams and many thousands of contestants.

“We have teams coming from China, Hong Kong, Lebanon, Canada, from around the world,” Schulte says. “There are 40 different states registered to compete and, of course, the international flavor gives a great experience to all the participants.” Teams from all areas of Iowa are taking part in the competition as robots designed and built by students are piloted through a series of obstacles and tasks. 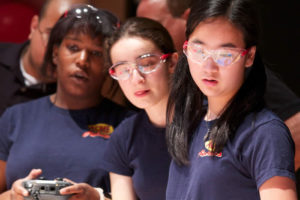 Some 500 teams will compete in the robot building.

“We’re starting to see Iowa really grow, in part, because of the U.S. Open and they’re also very supportive, as all of the teams are,” Schulte says. “They come in with volunteers and the quality of the teams in Iowa are really exceptional.” The CREATE Foundation is based in Omaha and its name stands for Competitive Robotics Enhancing and Advancing Technology Education. Schulte says it’ll be a challenging, rewarding week for the students.

“With judged events, they’ll go through interviews as well as on-field competitions where they do go back and forth,” Schulte says. “Of course, our objective is to get as many kids as we can interested in science and technology.” The tournament is free and open to the public. It runs today through Saturday at the Mid America Center in Council Bluffs.