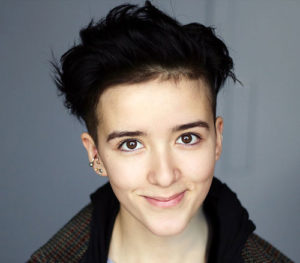 The first national tour of the Broadway musical “Fun Home” makes its only Iowa stop this week.

Based on the best-selling graphic memoir by Alison Bechdel, the audience is introduced to Alison at three different ages as she explores the mysteries of her childhood. Actress Abby Corrigan portrays the college-age Allison and tries to weave her own experiences into the role.

“In order to keep it human, I have to bring a lot of my own into it but also pay homage to her as well,” Corrigan says. “It’s not the same as playing like, for example, Natalie Portman portraying Jackie Kennedy. I think that’s what also makes it special. It’s still believable even though I’m not directly imitating her.”

Corrigan is a 19-year-old from North Carolina who’s been touring with this production for six months. She’s gotten to know the real-life Alison Bechdel and says it was initially terrifying to perform the role knowing Bechdel was in the audience.

“I remember the first time she came to see the show, I was so nervous,” Corrigan says. “I could see my hands shaking. This is such a special story and it’s so powerful. You want to tell it right and you want to tell it fully. I just wanted to give it everything I had.” The musical won five Tony Awards in 2015, was a finalist for the Pulitzer Prize and is the first production of its kind where the main character is a lesbian. Corrigan says the show really strikes home for many in the LGBT community.

“It’s entirely written by women,” Corrigan says. “It’s very, very important in that sense because it puts a light on how difficult it can be to accept yourself and how you can accept yourself or how it can end up destroying you if you can’t.” For some audiences, it’s a very touching and moving story, as it addresses extremely difficult, emotional topics.

“That’s why it’s so beautiful,” Corrigan says. “Humans aren’t perfect and neither is this show and that’s why people are drawn to it.” “Fun Home” opened last night at the Des Moines Civic Center and runs through Sunday.