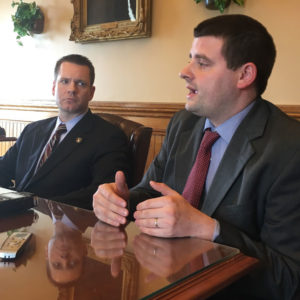 Republicans in the legislature have just released a basic sketch of their state spending plan for next year — and it’s about $14 million leaner than the current year’s state budget.

“It doesn’t happen very often, but I think again we’ve put together a responsible budget,” Representative Pat Grassley of New Hartford, the Republican chairman of the House Appropriations Committee, said this afternoon.

“I believe we have provided as much as we can, responsibly, to still adequately fund priorities,” Schneider told reporters.

The new GOP plan is even $38 million below Governor Terry Branstad’s recently revealed suggestions for next year’s budget. However, the Republican-led executive and legislative branches of government have agreed on this latest round of pruning.

The governor’s original budget plan that was released in January had to be ripped up due to lower-than-expected state tax revenue. Dave Roederer, the governor’s budget director, has been involved in the behind-the-scenes budget talks.

“Caution is always going to be the key word,” Roederer said during an interview.

Democrats in the legislature immediately denounced the budget plans revealed by Republicans. Senator Joe Bolkcom, a Democrat from Iowa City, said these budget cuts could have been avoided if Branstad had delivered on promises “to increase family income by 25 percent and create more than 200-thousand new jobs in Iow.” Representative Chris Hall, a Democrat from Sioux City, said it’s appalling that Republicans are borrowing from the state’s cash reserves to cover a budget deficit.

The GOP plans fulfill promises to send more state resources to Iowa’s public school districts next year. Legislators have not yet made final decisions about budget cuts in state agencies.