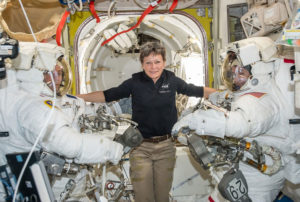 Peggy Whitson will on the International Space Station until September.

Iowa-born astronaut Peggy Whitson will be getting more time in space, while adding another command title to her resume.

Whitson was supposed to return from her latest mission aboard the International Space Station in June, but NASA has announced plans to let her stay in orbit an extra three months.

The 57-year-old Beaconsfield native has already spent more time in space than any other woman and later this month, she’ll set a new duration record for all U.S. astronauts.

It’s Whitson’s third mission to the station and on Sunday, she’ll be named station commander, the first woman to hold the command twice. In a NASA news release, Whitson is quoted saying: “This is great news. I love being up here. Living and working aboard the space station is where I feel like I make the greatest contribution, so I am constantly trying to squeeze every drop out of my time here. Having three more months to squeeze is just what I would wish for.”

Whitson’s two previous stays on the space station in 2002 and ’08 lasted six months each. This mission will now run nine months, with her return rescheduled for September. Just last month, Whitson set a new record for most spacewalks by a woman and her next EVA (extra-vehicular activity) should put her in third place for spacewalking among all astronauts.