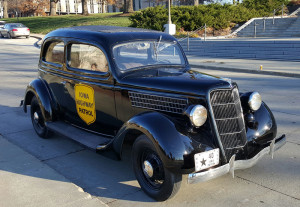 A vintage vehicle tour is planned next month to celebrate the 82nd birthday of the Iowa State Patrol.

Former Iowa Secretary of State Ola Babcock Miller of Washington is credited with the formation of the Iowa Highway Patrol in 1935.

“There will be a short presentation in Des Moines to kickoff our tour, as we drive over to Washington to Ola Babcock Miller’s grave site,” Dinkla said. The tour will be led by Dinkla, who will be driving a 1935 Ford Tudor — the first vehicle used by the Iowa Highway Patrol.

“We do a couple of different car shows around Iowa throughout the year. Last year was the first year that I actually got to drive the (Ford Tudor),” Dinkla said. “We did the Red Flag Car Tour, from Brighton to New London, and I got to drive that patrol car about 50 miles on that route.” The 1935 Ford Tudor was restored in 2015.
The public is invited to participate in the May 7th event by driving a vintage or modern day vehicle. The tour will make a stop in Oskaloosa between Des Moines and Washington. People who’d like to take part in the tour should contact Gerald Schnepf, with the group Keep Iowa Beautiful: [email protected]