You are here: Home / Fires/Accidents/Disasters / Two rescued after truck plunges into Turkey River in Elkader 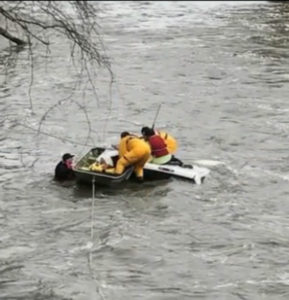 Firefighters rescued two people from this truck in the Turkey River.

Firefighters rescued two people after a truck crashed into the Turkey River in Elkader Wednesday afternoon.

“It was a pretty good drop off, so we jumped on and went in there,” Shea said. “I went in first. He was still in the truck. The man was still in the truck when I went after him.” The current and the location of the dam made for a tough rescue, but he and another firefighter managed to get the driver and passenger to safety.

“We got them out, and that’s the most important thing. It could’ve been a lot worse,” Shea said. Shea said it was their first time using insulated water rescue wetsuits which the department just got earlier this year.

“It would have been extremely cold for myself and Corey in the water without it, so we are grateful that we have that and very grateful that we actually trained on it,” Shea said. The son of the truck driver says his 85-year-old father is in the intensive care unit. He said the passenger in the truck is the caregiver. Their names are not available.