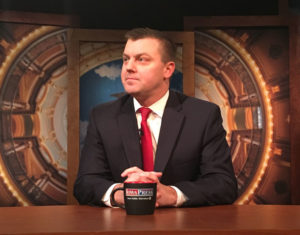 The president of the Iowa Senate today said he and other Republicans are anxious to reform and cut Iowa income taxes, but with about two-weeks of scheduled work left in the 2017 legislative session, the task may be tabled ’til next year.

“I was that hoping we could get to it this year,” Senate President Jack Whitver of Ankeny said. “There’s still an outside chance we could do something, but it’s looking more and more like this might be a 2018 issue.”

Whitver said the delay is mainly because when state tax revenues started falling below expectations, it forced two rounds of cuts to state budget plans.

“The reality of our situation right now in the state of Iowa is our budget is a little tighter than we hoped and we want to focus on getting our budget under control, do the fiscally responsible thing there,” Whitver said, “and then start looking at tax policy.”

After decades of resistance from within the Republican Party, Whitver said it is possible GOP lawmakers will get rid of the deduction that lets Iowans subtract their federal income taxes from their state income tax liability. Only one other state has that deduction and it makes Iowa’s income tax rates appear higher than they actually are.

“The states that are growing and thriving and are prospering right now are the states that have the lowest or even no income tax,” Whitver said. “I’m not sitting here today and saying: ‘Next year we’re going to eliminate the income tax,’ but the lower we can go on that, I think research shows we can be more prosperous.”

Whitver said he is willing to “consider anything” — including a single-rate “flat tax” on income — if it reduces the tax burden “on hard-working Iowans.” Cutting individual income taxes is a higher priority for Whitver than reducing the state’s tax rate on corporate income.

“That really isn’t that big a (part) of our state budget,” Whitver says. “What we really need to do is reform the individual tax code and that would help thousands of small business owners across our state.”

That’s because the majority of small business owners do not operate a corporation. They pay taxes on their small business by filing Iowa individual income forms. Whitver made his comments during taping of tonight’s “Iowa Press” program that will air on Iowa Public Television at 7:30.